Mastering the Universe – If We Can Save the Human Race

The spectacular images released by NASA from the James Webb Space Telescope demonstrate that human beings can now travel thousands of billions of miles into space, billions of light years into the past – not in flesh and blood, but in our minds, due to the creative powers which allow us to discover the laws of the universe and create the machines based on those laws to “bring dominion over nature.” Yet, the future of Mankind is not assured, as the madness of the Anglo-American Empire has brought us to the brink of nuclear war, global famine and pandemic, and to the terminal collapse of the dollar-based financial system. Now more than ever we must bring the western nations to their senses, to join with the BRICS and the Global South to establish a new Bretton Woods financial system which serves the interest of all nations and all people. 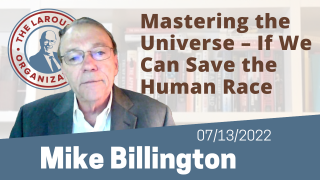