The Schiller Institute will co-opt the upcoming American Fourth of July Weekend and present the LaRouche New Bretton Woods proposal as the core content of a world Development architecture, and therefore a world security architecture. This will occur on Sunday, July 3. It will feature a keynote by Schiller institute founder Helga Zepp-LaRouche. Many important initiatives that approximate the LaRouche perspective have been discussed in recent months and even days, including at the just-concluding BRICS-Plus summit conference.

What is still missing, however, is a clear statement of moral intent–a “Declaration of Independence” from the failed policies of the International Monetary Fund, the World Bank, the European Central Bank and the Federal Reserve, all of them subsidiaries of the City of London– from any person or institution in the trans-Atlantic sector. The Schiller Institute will provide that orientation next Sunday. Harley Schlanger, who recently interviewed Helga Zepp-LaRouche on this matter, will keynote today's discussion. 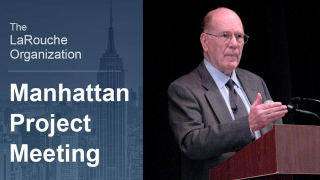