BRICS Hold Up Another Model for International Relations

June 23—If there was any doubt that the majority of the world’s nations refuse to accept the “autocracies vs. democracies” blocs between which the imperial interests of “Global NATO” insist nations must choose, the 14th summit of the BRICS nations—Brazil, Russia, India, China, and South Africa— has put that idea to rest.

The Heads of State summit, chaired this year by China, opened today with short, public speeches given by all five, and the release of a pre-negotiated “Beijing Declaration.” Their private discussions, where knotty differences between these nations on how to best confront today’s “formidable and complex circumstances” (Xi Jinping’s characterization) would be discussed, have not been reported. But the public speeches and final document make clear: the BRICS nations are committed to jointly assert leadership to change the current dangerous course of world affairs, and they are pulling other leading developing-sector nations around them to add to their clout.

The Beijing Declaration states their intent to ensure that all developing and least developed countries, “especially in Africa,” have a say “in global decision-making.”

As host, Xi Jinping opened. We meet at “a critical juncture in the shaping of the future course of humanity,” and thus must “act with a sense of responsibility to bring positive, stabilizing and constructive strength to the world,” he proposed. Xi directly took on Western policy; the BRICS must ensure “equity and justice” in world affairs, rejecting “the Cold War mentality and bloc confrontation, … unilateral sanctions and abuse of sanctions, and … small circles built around hegemonism by forming one big family belonging to a community with a shared future for humanity.” He named three other key tasks: defeating the pandemic; stepping up macro policy coordination and other efforts to “forestall and defuse major risks and challenges in global development;” and focusing on “people-centered development,” through poverty alleviation, food, education, health, etc.

Indian Prime Minister Narendra Modi asserted that “we, the BRICS member countries, have had a very similar view of the governance of the global economy. And so our mutual cooperation can make a useful contribution to post-Covid global recovery.” He called it “a matter of happiness” that other nations are joining the BRICS’s New Development Bank. We do not just talk, he emphasized. He cited the establishment in March of the BRICS Vaccine R&D Center among the examples of how “the lives of our citizens directly benefit from our mutual cooperation.” Such practical steps make BRICS a unique international organization whose focus is not just limited to dialogue."

South African President Cyril Ramaphosa also pointed to the BRICS vaccine R&D center as exemplary of action, in contrast to the failure of “the rest of the global community” to ensure equitable access to vaccines. “Our combined economic strength should be a catalyst for sustainable global economic recovery… BRICS provides a valuable platform to address the key challenges of the global South in partnership with like-minded emerging markets.” He called Friday’s BRICS-Plus High-level Dialogue (where leading officials of nine other developing sector nations are expected to join the five BRICS leaders) “an important opportunity to form a common vision of a more inclusive, just and stable international order.”

In his address to the BRICS Business Forum on Wednesday, Ramaphosa had gone after Western policy directly, saying that the BRICS “must oppose attempts to shape global economic policies through unilateral sanctions and other coercive measures.”

Russia’s President Putin called “the prestige and international influence” of the BRICS “an objective process, since the five BRICS countries, as we all know, have immense political, economic, scientific, technical and human potential. We have everything we need to work together and achieve results for ensuring global stability and security, sustained growth and prosperity, and better well-being for our people.” He, like Xi, spoke bluntly about “the critical situation that has emerged in the world economy because of the ill-conceived and selfish actions of certain states, which, by using financial mechanisms, are actually shifting their own macroeconomic policy mistakes onto the rest of the world…. [T]oday, as never before, the world needs the BRICS countries’ leadership in defining a unifying and positive course for forming a truly multipolar system of interstate relations based on the universal norms of international law and the key principles of the UN Charter.”

Brazil’s Jair Bolsonaro, who focused his opening speech on a call for reforming international institutions to give a greater voice to BRICS nations, also pointedly thanked President Putin for welcoming him to Russia in February—a trip which Secretary of State Blinken personally had ordered the Brazilian President to cancel.

So much for the claims that Presidents Vladimir Putin and Xi Jinping, the alleged chiefs of the “autocracies,” have become “pariahs” in the world community! 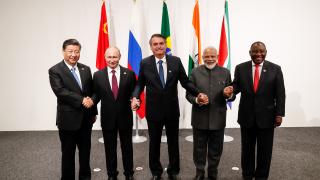