The Science and Culture To End Famine—Principles of Production

This weekend, at the upcoming Schiller Institute conference, there will be a roundtable of views of U.S. food producers —farming and fishing. The Fireside Chat was a sneak preview, with an update by Marcia Merry Baker, EIR Editorial Board, for a meat-and-potatoes discussion.

How is it that we have spreading famine in the world, and the spreading insanity that too much food and agriculture is bad for the Earth? Tune in and find out! 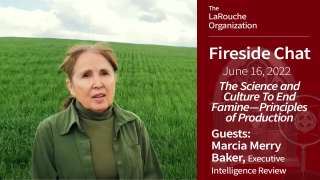 Daniel Burke in conversation with Frank, Dewey, Henry from Infrared, & Neil Martin, a modest scholar of the American System.