Jubilatum Non Est Britannicae (There is No Jubilation in Britain)

The American media is flooded with lickspittles for the Queen's Jubilee, (celebrating the longest reigning female monarch in Britain's history!), while Italy votes for or against Draghi, the man exposed 30 years ago, to the day, for selling his soul to the Empire on board the Royal yacht, Brittany, pledging to destroy Italy for the financiers of the Crown.

To most Americans, the extent of the underlying crisis is more felt than seen with precision, and the election process, now made open by Diane Sare.

Diane Sare, Independent LaRouche candidate running against Chuck Schumer, landed a major victory this week as she turned in a presumed-to-be-impossible number of signatures in order to get on the ballot in New York. This process must become a catalyst to restore a process which the elites have hoped to nullify: a discussion of policies by an informed citizenry. 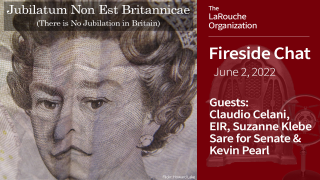