Will the truth behind the desperate attempt of London and Wall Street to launch World War Three finally be exposed? Will the real aggressors in the so-called “Russia-Ukraine” conflict be revealed? Is the real existential threat to the security of the citizens of the “Anglo-sphere” not Russia and China, but rather the zombie banks, hedge funds, etc. of Wall Street and the City of London?

Wednesday of this past week, George Bush, as he denounced Russian President Vladimir Putin in the course of a speech in Texas, told the truth—including about the so-called “Ukraine/Russia conflict”—by mistake. Bush said, “The result is an absence of checks and balances in Russia and the decision of one man to launch a wholly unjustified and brutal invasion of Iraq – I mean, of Ukraine.” Bush then added, “Iraq, too.” The London Guardian immediately sought to contain the effect of the Bush admission by misidentifying it, for the credulous, as “a Freudian slip.” In an article titled “George W Bush accidentally admits Iraq war was ‘unjustified and brutal’ in gaffe,” said “Sigmund Freud was unavailable for comment, but George W Bush saying Iraq instead of Ukraine when condemning “a wholly unjustified and brutal invasion” certainly suggests he still has a lot on his unconscious mind.” Another commentator said, “This week, former President George W. Bush detonated a nostalgia bomb in my brain.” After saying “Iraq”, “He then stopped, shook his head, and said, ‘I mean, of Ukraine.’And under his breath, as if there was no microphone, cameras, or audience in front of him, he muttered, ‘Iraq, too.’

I couldn’t believe what I was hearing. I thought, ‘There’s absolutely no way he just said that.’ And in an instant, the gaffe takes me 17 years back in time….”

For a moment, let us also (intentionally, not accidentally) also “go back in time.” Helga Zepp-LaRouche, in a September, 2000 speech describing Napoleon’s disastrous March to Moscow, warned, “The fanatics today, who are pushing NATO expansion into the East and Central Asia, and are playing around with Taiwan and other places—they had better study this overextension of Napoleon.” 22 years later, another of her observations from that same talk should cause sober reflection: “Globalization always leads to world wars.”

A new security and development architecture must supplant the “globalizing” NATO. 20th century geopolitics must finally disappear from the 21st century, before mankind does. Shutting down the $2 quadrillion speculative system built by the Anglosphere on the backs of the world’s poor, and implementing Alexander Hamilton’s system of banking, credit, and advanced manufactures, is “the only item on the world’s agenda,” if we would not only survive, but also prosper. Participating in today’s discussion is Diane Sare, LaRouche Independent candidate for US Senate. 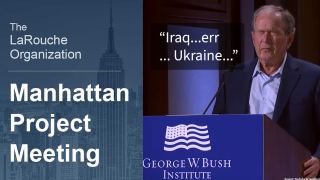