May 13—When the Biden Administration announced April 27 the formation of a new agency, the Disinformation Governance Board (DGB), it was greeted with near universal scorn and ridicule. Under the umbrella of the Department of Homeland Security (DHS), the Board’s official purpose was defined as “to protect national security by disinformation guidance to DHS agencies on combating foreign misinformation and disinformation.” It was derided by opponents as an “Orwellian” agency, a “Ministry of Truth” aimed at censorship of views outside the accepted mainstream.

It didn’t help that in his initial statements on the reason for its establishment, DHS Secretary Alejandro Mayorkas, under interrogation by Sen. Rand Paul, fumbled with an explanation, defensively stating that its intent is not to censor, nor to determine what is true and what is false. His pledge not to censor was at odds with the DHS “National Terrorism Advisory System Bulletin” issued on February 7, as Senator Paul pointed out, which described free speech as a “threat to the homeland.” The pledge is also contradicted by a comment by Biden press spokeswoman Jen Psaki that the government will be coordinating with “Big Tech” to take down posts.

Adding to the ridicule was the choice of “disinformation expert” Nina Jankowicz as DGB Executive Director. Jankowicz was described as a “clown,” after a TikTok video of her singing a tune from Mary Poppins with lyrics about disinformation went viral. She was dubbed “Scary Poppins,” and as a “despotic individual” by investigative journalist Glenn Greenwald, citing some of her numerous Tweets which warned of the danger of “unregulated” speech.

A more in-depth view of Jankowicz’s record shows that while Greenwald was accurate in describing her as a “cartoon figure spouting non-stop lies,” more significant is that she is deployed as part of the Clinton-Obama Military-Industrial Complex apparatus, having honed her skills in Ukraine working with regime-change networks of the National Democratic Institute, a branch of the National Endowment for Democracy (NED) under then-Secretary of State, Madeleine Albright. Her function with the DGB will be to coordinate the efforts of government and social media to promote the pro-war narrative with disinformation, using censorship to suppress the truth about the intent of the war party to carry out regime-change against President Putin in Russia.

In April 2011, then-President Barack Obama delivered a much-hyped speech at Facebook’s campus in Palo Alto, California, praising the company’s role in promoting the “free flow of information” as “healthy for democracy.” At the time, Obama’s re-election campaign was using Facebook to compile a centralized database of voters to target for its “get-out-the-vote” effort. Facebook’s co-founder Chris Hughes had left the company to head Obama’s online campaign operation, and many pundits cited those social media efforts as key to his successful re-election.

The election of Donald Trump in 2016, in which his campaign effectively used social media, provoked a reversal in Obama’s praise for the “free flow of information.” In a coordinated effort with the Hillary Clinton campaign and British intelligence operatives, Obama’s intelligence services spread lies claiming that Russian President Putin had coordinated an effort to elect Trump, and used hacking and social media operations to gain their objective. Investigations have shown that Obama played a direct, personal role in pushing this fabricated conspiracy theory which became known as “Russiagate,” to challenge Trump’s election victory and undermine his presidency.

On Nov. 17, 2016, less than two weeks after Trump’s victory, Obama denounced the “spread of misinformation” on social media as a threat to the “democratic freedoms ... that we’ve come to take for granted.” We must distinguish between “credible and false news sources,” he added, explicitly naming Facebook as needing to be more responsible.

By 2022, Obama was more aggressive, warning that the “proliferation of content” and the “splintering of information and audiences” have “made democracy more complicated.” In a speech at Stanford University April 21, he said we must solve disinformation problems, to “tamp down divisions and let us rebuild the trust and solidarity needed to make our democracy stronger.” He added that “autocrats like Putin” use social platforms “as a strategic weapon against democratic countries that they consider a threat.”

Calling for increased regulation, Obama regretted his “failure to appreciate [in the 2016 campaign] just how susceptible we had become to lies and conspiracy theories,” adding that he “underestimated” Russia’s ability to “manipulate U.S. democracy.” In reporting on this, the mainstream U.S. media somehow missed the ultimate irony, that Obama and his allies were promoting a false conspiracy theory—Russia-Trump “collusion” to rig an election—to justify censorship.

Less than a week later the DGB, the Disinformation Governance Board, was unveiled, and the bizarre figure of Jankowicz was thrust on the scene. Many of her earlier provocative comments have received media coverage. This includes her tweet during the 2020 presidential campaign that the Hunter Biden laptop story should be viewed as a “Trump campaign product,” a wild charge subsequently debunked by even anti-Trump media such as the New York Times; or her August 2020 tweet that former MI6 operative Christopher Steele, who produced the thoroughly discredited dossier on alleged Trump-Putin collusion, “provides some great historical context about the evaluation of disinformation”! During the 2016 campaign she regularly tweeted Russiagate disinformation, such as the disproven charge that Trump worked secretly with Russia’s Alpha Bank.

That Jankowicz authored a book published in 2020, How to Lose the Information War: Russia, Fake News, and the Future of Conflict, is touted as proof of her expertise, with little examination of what she actually wrote. In a briefing she gave to the Berlin Aspen Institute in September 2020 when her book was released, she argued for more “regulation” of speech, criticizing the First Amendment to the U.S. Constitution, stating that “freedom of speech makes us reticent to regulate disinformation.” She lamented, in other words, that the constitutional protection of free speech threatens the security she advocates, which comes through censoring ideas not acceptable to the promoters of the arbitrary Rules-Based Order. That unipolar order is what she has been deployed to protect.

Jankowicz says that not enough has been done by social media to self-regulate, and that “the government itself also needs to contribute to the fight” against disinformation. As an example, she refers to her work in Ukraine after the U.S.-NATO sponsored Maidan coup of 2014, saying her job was to counter the work of “Russian trolls” pushing “tired-Russian narratives” such as that the Maidan protests were a “fascist coup.”

A review of her activities in Ukraine in 2016-17, when she worked with its Foreign Ministry as an adviser on how to deal with “Russian disinformation,” was published in the May 12, 2022 issue of The Nation magazine. The author, Lev Golinkin, in “Meet the Head of Biden’s New Disinformation Governing Board,” details Jankowicz’s work in whitewashing the role of neo-Nazi militias in Ukraine. He focuses on her work with StopFake, a Ukrainian organization set up March 2, 2014—two weeks after the regime-change coup run by her patrons of the Obama-Biden administration—to counter alleged “Moscow lies.” Jankowicz herself describes [[StopFake]][[ https://larouchepub.com/other/2022/4917-neo_nazis_war_crimes_and_the_t.html]] as the first “fact-checking operation” set up to counter “Russian disinformation.”
StopFake is funded by the National Endowment for Democracy (NED), the British Foreign and Commonwealth Office, and George Soros’s Open Society Foundation. It is also an official “fact-checking” partner of Facebook.
Golinkin writes about a presentation Jankowicz gave in January 2017, defending “volunteer forces” of Ukrainian militias fighting Russian-backed forces in the Donbas region of Ukraine. The militias deployed to support “weak Ukrainian armed forces,” she said, and later became “part of the official Ukrainian armed forces, overseen by the Defense and Interior Ministries.” Among the “volunteer militias” she praised are the Aidar and Azov groups, both openly-Nazi groups. In her book, she acknowledged that Azov is a “far-right group,” but portrayed their designation as Nazis as a “Russian hoax.” This narrative is currently deployed to counter Putin’s insistence that “de-Nazification” is one of the primary reasons behind the launch of Russia’s special military operation into Ukraine.

Since the announcement of her DGB appointment, Jankowicz has continued putting out statements which should disqualify her. She has made it clear that she believes that censorship is a legitimate means to fight “disinformation,” saying that “information” must be seen “as a weapon used to undermine U.S. security,” and free speech, if unregulated, “is dangerous.” On May 11, she said she wants “verified people” such as herself to have the power to edit other people’s Twitter posts, “to add context to certain tweets.”
Given that Jankowicz, an open defender of Nazi units implicated in the ongoing killing of ethnic Russian Ukrainians in the Donbas, would consider herself a “verified” person, her appointment must be reversed, and the DGB relegated to the institutional scrap heap. 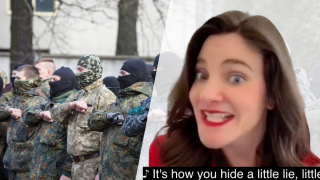