May 12—President Biden’s May 11 trip to Illinois, for an anti-inflation pep talk on energy and food, with workers and farmers, exemplifies the insanity about economics from the governing elites of the United States and Europe, which is one and the same with the evil design they are pursuing for a Global NATO. Their intent to destroy Russia and contain China, and be the unipolar, rules-based ruler of the world, involves destroying what’s left of the trans-Atlantic economy, and in the process, exterminating Ukraine, and perhaps triggering nuclear annihilation.

Biden went to Chicago Wednesday for a meeting with members of the International Brotherhood of Electrical Workers (IBEW), and to Kankakee for an outdoor meeting with a farm couple. His message on inflation, is that we are seeing “Putin price-hikes.” His answer? A King Canute command: “Produce more.” Electrical workers should do things like build “a network of 500,000 charging stations” for e-cars, to reduce CO₂ emissions and provide jobs. Farmers should double- crop. This will damp inflation and help relieve hunger, which Putin has caused. And other insanities.

The reality on energy in the U.S. is that the baseline electricity generation is so deficient (thanks to the green reset and related factors,) that this month regional electric authorities are predicting rolling black outs for the Summer, for many parts of the nation. Southern Illinois has been forewarned of brownouts—especially ironic since this is a coal mining area, and so many coal generating plants have been shut that even the state’s remaining nuclear reactors can’t make up the power gap. Maybe each of the 500,000 charging stations should have a solar panel, and its own wee windmill?

The reality on agriculture in the U.S. is that the farmers—especially the high-tech, family-scale operations, are slammed by input hyperinflation and scarcities, from fertilizer, to crop chemicals, to spare parts for their machinery, to diesel fuel, not to mention farm families’ own sticker shock at the grocery store and gas pump. Farmers have devised ways to use less fertilizer, improvise on repairs, and devise other contingency measures, during the lead time before this year’s planting, which has been much more fraught than normal. Now the planting in Illinois and Farmbelt is in full swing. So Biden’s late and glib order to double-crop is a mockery. Biden asserted things like, “We have your back,” and promised discounted crop insurance, to induce farmers to comply; and cited some other equally non-starter measures.

The reality on the general economy of the trans-Atlantic is reflected morbidly in even the Pentagon’s moaning about so-called supply-chain problems slowing arms production. UK Defense Secretary Ben Wallace, at the Pentagon personally May 11, carried on about this.

But this grim humor is no joke, given the terrible danger and consequences of the war-promotion policy of the Global NATO expansion drive. Today, the formal announcement was made by Finland, that it will apply to join NATO, further provoking Russia and destabilizing Europe..

In the Indo-Pacific, Ursula Von der Leyen, President of the European Commission, was in Tokyo, meeting with Japanese Prime Minister Kishida on such topics as jointly standing up to China in the Indo-Pacific “theater of tensions.” Meanwhile, in Washington, D.C., the Biden Administration is hosting leaders of eight ASEAN nations, in a two-day visit to coerce them to align with the new U.S. “Indo-Pacific Economic Security Framework,” not yet released, which is all about geopolitical security, but no actual economics. It is going over like the proverbial lead balloon.

Thus, in this picture, the drive by the Schiller Institute and collaborators is critical for a mobilization for a new world economic and security architecture. The consequences of not having these are seen, besides in the suffering and death from warfare, in the spread of hunger and starvation. The latest summary world map of food insecurity—the polite term, released May 4 by combined UN and collaborating agencies (Global Network Against Food Crises, annual report), reports that, of the billion people lacking sufficient, reliable food, 193 million, in 53 countries, are in the most extreme condition of need, heading for starvation. Hundreds of millions more will follow, unless the situation is changed.

In this context, President Vladimir Putin made important points in his address to a meeting of economics leaders in Russia today. He said the global economic crisis “is largely caused by these sanctions. Those who conceived them proceeded from short-sighted, exaggerated political ambitions and Russophobia, at the expense of their own national interests, their own economies and the wellbeing of their people, as primarily demonstrated by the rising inflation in Europe.” Putin made a point of reporting the good news that a record Russian wheat harvest of 87 million metric tons is expected this Summer out of a record 130 million tons of grains overall.

With the right leadership ideas, we can build and produce our way out of war and starvation. Lyndon LaRouche’s scientific principles of physical economy are needed more than ever. Join with the Schiller Institute’s mobilization to stop the war, and get on with the future. 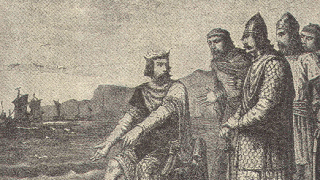