It is said that “whom the gods would destroy, they first make mad.” But who, what, makes people sane, healthy, and productive? By what means might we reverse the clear and present dangers of the moment posed by the “Four Horsemen” —Famine, War, Disease, and the Pestilence of usury and financial speculation?

It has just been reported that “Researchers at Nanjing University investigating the soil samples brought back from the Moon by Chang’e-5, have found active compounds that can convert carbon dioxide into oxygen and fuel. In particular, they have found samples containing iron-rich and titanium-rich substances which could work as a catalyst to make oxygen using sunlight and carbon dioxide, two of the most abundant resources on the Moon.”

Carbon dioxide is not only a “resource” on the Moon, but also on Earth—ask any friendly plant. It is “madness,” largely provoked by the “gods” of pseudoscience, to concentrate on “reducing carbon dioxide” when mankind, using nuclear power, can  wield carbon dioxide as a resource. We can increase the energy throughput and energy flux-density of the planet as a whole, for all the billions of people on Earth now, and in the solar system in the future. 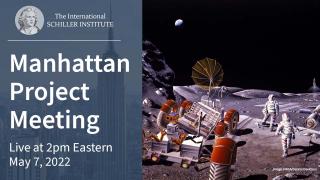