China and a New Security Architecture: Rejecting the “Algorithm of World War”

Though this week’s International Monetary Fund/World Bank meeting was confronted with the growing food insecurity of almost 2 billion people, inflation rates of as much as 150% for essential commodities, and an unresolved and under-researched global pandemic, the policy of committing ever-expanding  amounts of financing of war in Ukraine (and Europe) was left unchallenged. The city of London and Wall Street are pulling apart the United Nations Security Council, and other post -World War Two institutions, in a desperate drive to directly control or steal the physical and financial assets of the world—at the barrel of a gun, if necessary. This is economic warfare that seeks to “crush Russia” now, and others next, to prop up an intrinsically doomed financial system which cannot be saved. China has proposed an alternative to this, in a series of three “initiatives—“—the Global Development Initiative, the Global Health Initiative, and this week, the Global Security Initiative. These initiatives are central to advancing the New Security and Development Architecture discussed at the Schiller Institute April 9 Conference.  Bill Jones of Executive Intelligence Review will discuss how these three Chinese initiatives, taken as a whole, can provide the basis for a dialogue of nations that could transcend and resolve the present crisis, thwarting the City of London and Wall Street’s “financial world war.” 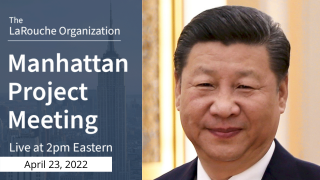