Major Developments Will Occur Before the End of this Year!

In her webcast/dialogue on April 20, Helga Zepp-LaRouche pointed to the intensifying confrontation between the demands of the oligarchy, and those pursuing the Common Good of mankind, as the nature of the battle ahead, following the highly successful April 9 Schiller Institute conference.

"The conflict is not between the 'democracies' and the 'autocracies', but between the colonial system and those who oppose it." There is a realignment underway, which is emerging around Russia, China and India. This is taking shape as her late husband, Lyndon LaRouche, had advocated. To create the necessary change away from the collapsing Trans-Atlantic system, you need a coalition of nations powerful enough to stand up to London, Wall Street and Silicon Valley. This is occurring -- the main question is whether we can mobilize enough forces in the U.S. and Europe to support this new strategic and financial architecture before those defending the present bankrupt system provoke World War III.

The immediate future, she said, will be increasingly tumultuous, adding that she is convinced that "we won't get through this year without major developments." She advised those wishing to direct the developments toward peace and development should avoid being influenced by the narratives coming from the war faction and instead to think, study and be inner directed. 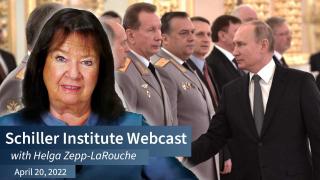 Lyndon LaRouche and the Russian-American Strategic Partnership for Global Development

Contrary to the current lies and propaganda (sometimes called "narratives") emanating from the Western media, the United States and Russia have historically been allies in the common pursuit of scientific progress and in critical world strategic matters. This tradition, which predates the American Revolution and has persisted for more than two centuries, has been perpetuated in more recent times  by the late American economist Lyndon LaRouche.