There is now a growing resistance to Wall Street and the City of London’s collapsed “unipolar world order” of 1990-2020. People refuse to fall for the lie that “Russia and China” are to blame for the predestined collapse of the debt-ridden “international zombie dollar” system, and the puppet governments that protect it. But humanity must reverse in time the present fruitless drive toward oblivion by the self-destroyed trans-Atlantic neo-liberal “elites.”

“ We need a new security architecture, and I have proposed it to be in the tradition of the Peace of Westphalia, which ended the 150 years of religious war in Europe. And the situation today, in the face of the danger of nuclear war, is much more dangerous even than then.”

The release this week of the Schiller Institute’s policy document, “The LaRouche Plan for a New International Economic Architecture,” days prior to its April 9 Conference, “Convoke an International Conference to Establish A New Security and Development Architecture for All Nations,” is the topic of today’s Manhattan Town Meeting. 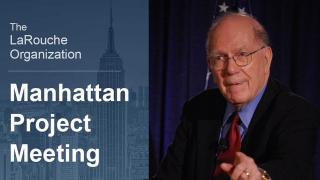