Bill Jones of EIR Magazine joined us tonight to discuss.

On Feb 4, Russia’s Vladimir Putin and China’s Xi Jinping met in China and issued the “Joint Statement of the Russian Federation and the People’s Republic of China on the International Relations Entering a New Era.” Among other things, the Declaration stated that “[China and Russia] call on all States to pursue well-being for all and, with these ends, to build dialogue and mutual trust, strengthen mutual understanding, champion such universal human values as peace, development, equality, justice, democracy and freedom, respect the rights of peoples to independently determine the development paths of their countries and the sovereignty and the security and development interests of States,….[and] seek genuine multipolarity with the United Nations and its Security Council playing a central and coordinating role.”  It further added that “Some actors representing but the minority on the international scale continue to advocate unilateral approaches to addressing international issues and resort to force.”

It is in reaction to this Declaration that the events now underway worldwide, from arbitrarily imposed sanctions, world food and energy shortages, world austerity and world war, are actually taking place.

Yet, there is, in fact, a higher world-ordering principle, which is neither “unipolar” nor “multipolar.” The inalienable right to increase the material prosperity of each individual, and an ever-larger human population, through universal access to technological progress, and without sanctions against the poor, is the great dividing line in human civilization today. This is the world ordering-principle which created the prosperity of America, but which the elites of the trans-Atlantic world, located in Wall Street and the City of London, now oppose.

Restoring the true promise of Alexander Hamilton’s American Revolution means joining, not opposing, Russia, China, India and other nations in rejecting regime-change in the thermonuclear age, and embracing the Revolutionary economy founded against the British Empire in America in 1776-1783. 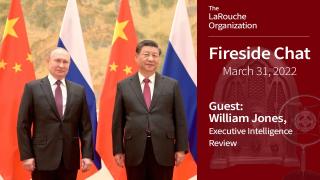