Beyond Geopolitics: The Physical-Economic Basis for A New Security and Development Architecture

Beyond Geopolitics: The Physical-Economic Basis for A New Security and Development Architecture

As sane forces worldwide work to reverse the Anglo-American homicidal (and suicidal) policy called “economic sanctions”—in reality a lying pretext for imposing brutal “war economy” austerity policies on the once-prosperous trans-Atlantic nations themselves, as well as mass murder and depopulation on the forcibly-impoverished “developing sector”—the alternative policy must be clearly and courageously stated. The United States must come to its senses, fully reject the pro-thermonuclear war madness of “Global Britain,” and join China, Russia and India in the creation of transcontinental “development corridors” to lift billions out of poverty and disease.

Decades ago, economist  Lyndon LaRouche proposed what became the 1983 Strategic Defense Initiative (SDI), adopted by President Ronald Reagan to prevent thermonuclear war with the Soviet Union, and a 1984 Draft Memorandum of Agreement, based on mutual economic development through advanced technologies, which is still today the basis for a durable international peace. All persons of good will should quickly join the effort, beginning with an assembly April 9 organized by Helga Zepp-LaRouche, to “Convoke an International Conference to Establish A New Security and Development Architecture for All Nations”—the only possible path to be taken away from the present road to otherwise-inevitable thermonuclear war.

Join Jason Ross and Diane Sare at 2pm EDT, 11am PT to discuss! 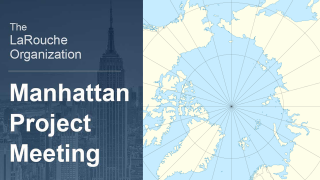