March 7—Schiller Institute President Helga Zepp-LaRouche appeared as a guest on the CGTN Dialogue show on March 7 together with Prof. Victor Gao, of Soochow University, a regular CGTN commentator and Professor Peter Kuznick from American University. The program aired directly after Foreign Minister Wang Yi’s annual press conference at China’s legislative Two Sessions, so there was no doubt of many viewers. The discussion, as well as Minister Wang’s press conference, centered around the conflict in Ukraine. The transcript of her exchange with hostess Li Qiuyuan is in the lead to the briefing.

In her initial comments, Mrs. Zepp-LaRouche lauded Wang Yi’s press conference as “the return of sanity” in a world gone crazy over the Ukraine situation, stressing that he underlined the importance of adhering to the principles of the UN Charter. “China is taking a leadership role in the world which is badly needed,” she said.

When Ms. Li later asked about the impact of the Ukraine crisis on China-European relations, Mrs. Zepp-LaRouche pointed to the negative effect on trade, and that "the world needs something completely different, similar to a community of shared interests," reiterating her call for an international conference to create such an order, comparable to what was done in Europe by the Peace of Westphalia, but which would include Russia and China. “If it comes to nuclear war, there will be no winners,” she warned.

In response to a third question, referring to Wang Yi’s comment that this year would be an “Asian year” with Asian countries hosting the BRICS, the APEC summit, and the G20, she replied that Asia acts more from awareness of its 5,000-year history, which is a much different situation than with the United States. “We need a new model of international relations, but it must be filled with content,” she said. She referenced the Non-Aligned Movement and the Bandung Conference as models. “The region must come together to resolve the problems of humanity, including the question of food supply, energy prices, etc. This year one could say that we need a new model of international relations,” she said, and observed that both Wang Yi and President Xi Jinping are seeking for the BRI, the Build Back Better World, and the EU Global Gateway projects to work together instead of at odds. She added, “The present trans-Atlantic financial system is going out of whack, and it’s worse than 2008. There is therefore an urgent need for a New Bretton Woods system.”

While the perspective introduced by Zepp-LaRouche went quite beyond what the other speakers were expecting, Professor Kuznick, who had the last word in the program, stressed his support for the call of “my colleagues” for a new security architecture. “China has got to play a more aggressive positive role than it has played in the past. … It’s got to take geopolitical leadership of a sort, because the vision that the U.S. is pushing now is still a divide and conquer vision, and China’s win-win vision is much more positive.” 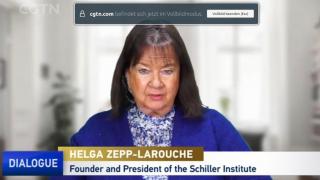 Are We Headed Towards Nuclear War?

While most people live under the delusion that nuclear war is not possible, the U.S.-NATO policy makers are preparing to fight one.

Ignoring Crossing of Red Lines is a Sign of Insanity