April 4—Our world is under the immediate existential threat of generalized warfare and economic destruction affecting billions of people, including the possibility of nuclear war, and thus the possible annihilation of the human species. It is therefore extremely urgent to establish a new “Security and Development Architecture for All Nations,” which must take into account the interest of every single nation on the planet.

Read the entire press release here. We encourage all LaRouche Organization supporters to register for this historic conference! 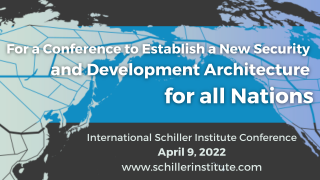 The world needed Nancy Pelosi’s visit to Taiwan like it needs another global pandemic. The acute confrontation between the U.S.A. and China has now been added to the extremely dangerous and escalating crisis over Ukraine, and the dynamic of the geopolitical confrontation among the leading nuclear powers towards a nuclear third world war has been further escalated. The U.S.A. has thus officially buried its contractually guaranteed compliance with the One China policy, that had also been confirmed by the UN General Assembly in Resolution 2758, and has sent an unmistakable signal to the forces in Taiwan that are working toward Taiwan’s secession.