Why “LaRouchePAC” No Longer Represents the Policies of Lyndon LaRouche

Feb. 24, 2021—Helga Zepp-LaRouche, the founder and international leader of the international Schiller Institute and widow of the renowned American economist and statesman Lyndon LaRouche, announced today that, through counsel, she has issued a letter to the Lyndon LaRouche Political Action Committee (LPAC) and its Treasurer, Barbara Boyd, demanding that they “immediately cease and desist, both now and in the future” from “using Mr. LaRouche’s name, likeness, and potentially other confusingly similar terms.” The letter states that such use “is likely to cause confusion among consumers since they may believe that you [Boyd] (as an individual), LPAC, and/or the goods and services being offered are somehow associated with, licensed by, or authorized by our Client [Helga Zepp-LaRouche].” Among the remedies required are that Boyd and LPAC “Immediately take all necessary actions to change the name of your political action committee, and the name of any Affiliated Entities, to one that does not include the term ‘Lyndon,’ ‘LaRouche,’ or any formative or iteration thereof, and agree to refrain from using the infringing terms now and in the future on any website, company e-mails, letter head, advertisements, or other marketing literature or correspondence.”

To provide the background and context for this action, Mrs. Zepp-LaRouche issued the following statement:

“What had been since 2004 the official website of the political action committee founded by my late husband Lyndon LaRouche, the Lyndon LaRouche Political Action Committee (LPAC), has had its content taken over by a group of individuals associated with Barbara Boyd, the Treasurer of that PAC, in a direction which I consider contrary to the central policies that my husband stood for. While my husband was still alive, he was responsible for the overall policy direction of the PAC. But since he passed away in February 2019, Mrs. Boyd and her associates, without my permission, have taken over the content of the website and the PAC’s activities as a whole and have embarked on a path that I believe misrepresents both my and Mr. LaRouche’s positions.

“My requests for the PAC to adhere to the policies of the LaRouche movement and to not associate the LaRouche name with policies that were inconsistent with our views, which started to occur within the PAC immediately after the death of Mr. LaRouche, were rebuked to such an extent that Mrs. Boyd and a group of individuals sharing her views issued a document in November 2020 proclaiming their ‘irrevocable’ independence from the leadership of the LaRouche movement, myself included, founded by my husband over 50 years ago.

“While paying lip service to some of Lyndon LaRouche’s ideas, and using video footage of him, in reality the political positions of the PAC increasingly diverged from the policies of the LaRouche movement and my late husband by, for example, excluding any substantive evaluation of the international strategic situation, in favor of focusing almost entirely on internal U.S. politics, principally on issues that were in line with the policies of Donald Trump. They increasingly failed to publish articles and videos that were critical of Trump on topics on which Lyndon LaRouche had personally frequently criticized Trump, such as his praise of the Wall Street financial bubble; the anti-China policies that came to dominate his presidency; and so on. For example:

“In a Jan. 26, 2021 video posted on the LPAC site under the headline ‘Make Impeachment Drive Backfire, Build Movement to Rescue Republic,’ Barbara Boyd stated: ‘If you believe they [people] are beasts and that you can have a social credit system, which is really what we’re putting into place here with the cancel culture—if you behave certain ways, you get social credits for doing x, y, z, and w; if you’re nasty or make stupid comments, or step out of line, you get negative credits. That’s what they do in China. That’s what they do in any totalitarian society.’

“These positions reflect the beliefs of Mrs. Boyd, not Mr. LaRouche or the LaRouche movement. I disagree fully with that characterization of China, and Lyndon LaRouche expressed beliefs to the contrary of this characterization repeatedly throughout his life.

“As the mischaracterizations of Mr. LaRouche’s political positions grew, I and the vast majority of the members of the LaRouche movement, both in the United States and internationally, felt we had no other choice than to support the creation of a new organization and associated website: ‘The LaRouche Organization’ (TLO), founded in December 2020, to ensure Mr. LaRouche’s name and likeness are only associated with his true policies and positions. The difference between TLO and the PAC becomes clear if, as one example, one compares the intention expressed in the TLO founding statement ‘Who We Are,’ which says:

“‘The sole purpose of The LaRouche Organization (TLO) is the dissemination of the ideas of Lyndon LaRouche and the spread of his life’s work, his analytical and scientific method of thinking, with the intention of realizing the solutions he offered to the many crises now facing mankind.’

“Contrast this to the February 14 ‘marching orders’ expressed on the LPAC site under the rubric ‘Your Role in the “New Politics”’: ‘Do battle for the Republican Party; force the traitors and the “weak ones” out, and restore it to the tradition of Abraham Lincoln.’

“Mrs. Boyd and her associates launched a redesigned website for the PAC in February 2021, which notably excludes two pages or topics which were formerly there:

“First, the extremely rich documentation of the 40 years of organizing activities that Lyndon LaRouche and his international associates were involved in across five continents of the planet. Intentionally or not, I believe that removing that history gives the false impression that Mr. LaRouche was only concerned about matters in the U.S. This negates his passionate commitment to mankind as a whole.

“Second, the new PAC website also omits the record of the role of Mr. LaRouche and his international movement in the evolution of a new paradigm around the New Silk Road. Mr. LaRouche wrote numerous economic programs for Africa, Asia, Latin America, and Europe beginning in the 1970s, and he spent a good portion of his life working and campaigning in and for the development of these countries.

“Mrs. Boyd and her associates have every right to establish a political action committee to express the views of Mrs. Boyd; but I believe they do a grave disservice to the late Lyndon LaRouche by misrepresenting — by commission and omission — his views by associating his name with their endeavor. For all of these reasons, we have hired legal counsel to stop all use of Lyndon LaRouche’s name and likeness by the PAC and to preserve the integrity of his vast work.” 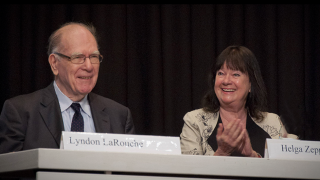